Tour Overview
Vietnam’s history is rich with legend, tradition, determination and adaptation. An all encompassing trip visiting the highlights of this vibrant country. From the dynamic Saigon, Mekong Delta River, 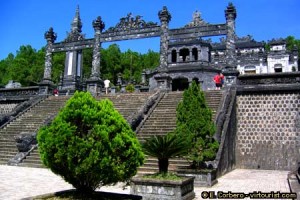 charming Hoi An town, historic Old Royal City in Hue to the architectural splendor of Hanoi, this is sometime called Land of Rising Dragon, the spectacular Halong Bay, this trip captures the best of Vietnam from South to North.

Day 1: Sai Gon Arrival ( D )
Upon your arrival at Tan Son Nhat Airport, you will be welcomed by Vietnam TripAdvisor’s guide and transferred to hotel in Sai Gon, still called Saigon by many locals, is crowded with motorbikes and cars, excited by numerous shopping area and sidewalk cafés. An afternoon city tour takes us to the Reunification Palace which was the former residence of the President of South Vietnam until the end of April 1975. Close to the palace are some beautiful French colonial structures including the Notre Dame Cathedral and the Old Saigon Post Office. We also visit the Jade Emperor Pagoda and the War Remnant before we continue to the bustling Ben Thanh Market where anything and everything is for sale. Welcome dinner at one of the finest restaurant of Sai Gon. Stay overnight at hotel in Sai Gon.
Day 2: Mighty Mekong Delta ( B, L) 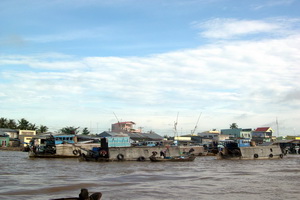 Heading out of the town, we travel by roads to the Mekong Delta, Vietnam’s largest rice bowl. On arrival in My Tho, we embark on a boat navigating around the intricate small canals in the delta region, which is a great way to observe the local lifestyle close-up and catch a view dotted by many islands. The exciting excursion will pass the lush green vegetation before arriving at the famous Unicorn Island. Here we have opportunities to stroll around an orchard, taste many seasonal fruits and enjoy wonderful traditional music. The next stop of our trip is Ben Tre Province to visit some fascinating local industries. After feasting on a huge lunch we return to Sai Gon, stopping off along the way to see the beautiful Vinh Trang Pagoda and the Cho Lon, Saigon’s Chinatown, which is crammed with sacred temples and mysterious, narrow lanes. Overnight in Sai Gon.
Day 3: Sai Gon – Hoi An Ancient Town ( B, L) 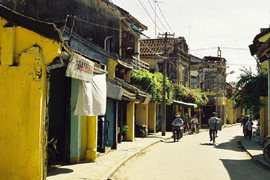 After breakfast at hotel, we board a short flight to Da Nang. Upon arrival, we will pick you up and transfer to Hoi An which was originally a Cham seaport from 16th century but has been influenced down the centuries by a myriad of traders from various cultures. We stop en route to visit the Cham Museum in Da Nang City, the Marble Mountain, whose peaks represent the five elements of the universe. Upon arrival, check into hotel. Have lunch at one of the famous restaurants of Hoi An before having a walking tour. The ancient architecture of Hoi An is a fascinating combination of Vietnamese traditional characters with Chinese and Japanese influence. There are plenty to see in this delightful town, some of which are Japanese Covered Bridges, the Pottery Museum, the 200 years old Tan Ky House, the Chua Ong Pagoda, the vibrant market. Today, we include these on a walking tour past many low tiled houses scattered along the small streets and assembly halls which reflect the town’s multi-cultural past. Dinner and accommodation at hotel.
Day 4: Hoi An – Hue (B, L)

The next destination is Hue, the Old Royal City in Vietnam in 17th century. Upon leaving Hoi An, we drive north to Hue. The scenic road is hugging the coastline before crossing over the winding Hai Van pass. A view from the top of the pass is one of Vietnam’s most impressive panoramic scenes. We stop en route to visit the Lang Co beach before reaching Hue city. As Vietnam’s last feudal capital, the small and quiet city of Hue is widely known for magnificent architectures, pagodas and royal tombs laid in many small villages and surrounding hills. We spend this afternoon to visit Hue with the massive citadel, which contains the Imperial City and the Purple Forbidden City. This royal residence was all but destroyed during the 1968 Tet Offensive, however it is still fascinating to walk among the ruins. Overnight in Hue.
Day 5: Hue – Hanoi ( B, L, D )
Embark on boat on Perfume River to visit Thien Mu pagoda, the beautiful riverside pagoda which now becomes the symbol of Hue, and the elaborate royal tomb of Emperor Tu Duc are not to be missed. After an impressive boat trip, we return to the town and enjoy a walk to the bustling Dong Ba Market that sells a wide variety of local goods and handicrafts. Along the way we pass by many fantastic eating spots, ideal places for visitors to sample some local delicacies before we aboard a short flight to Hanoi. Upon arrival, you will be greeted and transferred to hotel. Hanoi is a stylish and gracious city that retains an unique old world charm and some Asia‘s most striking colonial architecture. The many lakes and parks make for relaxing atmosphere. Have lunch at restaurant in Hanoi (optional) before visiting Literature temple, the first University in Vietnam in 16th century. If time permits then we enjoy a short cyclo excursion through the bustling 1000 Years Old Quarter streets named after the specific goods once offered for sale at these places. Then enjoy Water Puppet Unique show. Welcome dinner at Lotus restaurant, one of the finest restaurants in Hanoi.Relax and stay overnight at hotel.
Day 6: Hanoi – Halong (B, L)
08: 00am: Transfer to Halong city for boat cruise on the Bay, stop on route to admire the landscape picture, you might take picture of buffalo boys. Embark on Junk, boat crew will greet you with special seafood lunch while boat cruise around the bay to visit Dinh Huong island, Ga Choi island, Dog island, Sail island, visit Sung Sot cave and a swim at Titov beach before finishes at harbor for transfer back to Hanoi.
Day 7: Hanoi – Departure ( B ) 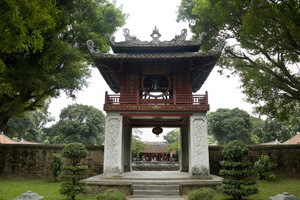 Free at leisure until time transfer to airport for flight back home.
Tour Price

The Flash Player and a browser with Javascript support are needed..