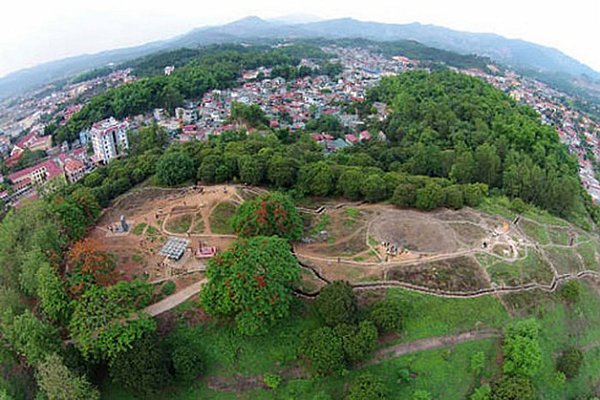 This was the scene of the siege in 1954 that finally broke the back of the French war effort in Vietnam . In an attempt to halt Viet Minh (Vietnam Independence Association) incursions into Laos , the French commander, Navarre , decided to establish a “super garrison” at the top end of a valley called Dien Bien. This was to police the strategic cross-roads between Laos to the West, Son La to the South and Lai Chau to the North. He believed that with this base firmly established in the Far Northwest, he would be able to launch sorties against the Viet Minh, and greatly reduce their strength in the area. He was to be proved terribly wrong. The Viet Minh commander, Vo Nguyen Giap, finally saw an opportunity for an open confrontation with the French and started working towards it. By mid 1953, the base was completed and regarded in French circles as virtually impregnable. With twelve battalions of French, Morrocan and Algerian soldiers, two airstrips, a heavily mined perimeter and surrounded by a number of smaller defensive positions, named Dominique, Elaine, Claudine and Huguette. These were named, supposably, after the four mistresses of the base commander Colonel Marie Ferdinand de la Croix de Castries . The troops within the compound slept fairly soundly at night! The French even went to the extent of flying in an entire brothel of French women to keep the soldiers happy!! For Giap and his comrades, however, the struggle had hardly begun. They embarked on an incredible logistical feat of dragging up, in pieces, various heavy field guns that were then hidden in caves and dense forest cover in the hills surrounding the Dien Bien Phu base. By early 1954, Giap had over 40,000 men in the hills, completely surrounding the base. It was estimated that just to keep Giap’s men fed, over 250,000 porters were used to ferry food, private Vietnam tours.
For the French it was their ignorance amongst other things that led to their downfall. Though they knew the Viet Minh had some troops in the surrounding hills, nothing was done about it, until it was too late. On 10 March 1954 , to the horror of the French, Viet Minh shells started landing on the airstrip. Giap possessed a comprehensive plan, first if which was the neutralisation of the airstrips, thus completing the siege. The French were taken completely by supprise, and after the first day of shelling, an assault was made on Gabrielle. By midnight 13 March, Beatrice had fallen. The fighting was fierce, with the Viet Minh often following up hours of shelling with human wave tactics, incurring shocking casualties. At times the fighting was hand to hand and always chaotic, with the French utterly frustrated by their inability to hit Giap’s well-concealed guns. Within five days, both the airfields had been completely destroyed and the garrison could only be re-supplied by airdrops, an increasingly perilous pastime, proven by the wrecked planes on the ground. As the Viet Minh edged closer and closer in trenches, the airdrops increasingly fell into Vietnamese hands. The position was becoming truly desperate. At the start of April there was a lull in the fighting during which Navarre parachuted in some of his crack troops adding to his garrison now totalling about 16,000. Giap also brought in his reserves, edging his forces up towards the 50,000 mark. The French were desperate and they appealed to the US for assistance, preferring bomber strikes from their bases in the Philippines . By this stage the US was funding 78% of the French war effort, so they hardly had unstained hands. They came back with a proposal for limited tactical nuclear strikes on the Vietnamese positions along with a series of strikes on China , fearing ‘another Korea ’, all of which would be performed on French behalf. Thankfully this insanity was avoided by the British giving the idea a big no and congress getting cold feet. In the end there was nothing forthcoming from the US . For the French, the end was near. On 4 May following a series of attacks, the Viet Minh attacked with a force previously unwitnessed and by 8 May the garrison finally surrended. By this stage the conditions within were unimaginable, with maggots in the wounds of the injured and an incredibly demoralized fighting force. It was estimated that during the battle 7,000 French and close to 20,000 Vietnamese had lost their lives. This loss finally caused the French to withdraw from Vietnam.
Dien Bien Phu now bears few scars except for the occasional scattered tank to bear witness to its horrendous past, though it is still one of the remotest areas you could visit. The hill tribes living around the area of Dien Bien Phu make up 70% of the regions population, and the ethnic minority groups include the Black Thai, Nung, Hmong, Loa and others.