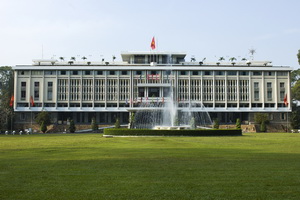 You arrive Tan Son Nhat (Saigon) International Airport. Transfer from Airport to Sai Gon at any time then transfer to hotel in Sai Gon for check in. Free for leisure. Overnight in Sai Gon. 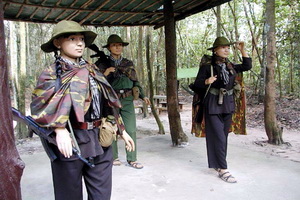 This morning enjoy a city tour that includes the Reunification Hall, formerly known as the Presidential Palace. It was towards this modern building that Communist tanks rolled on the morning of April 30, 1975, as Saigon fell. This fascinating building is filled with history still fresh in the minds of many. The tour also includes the Old Post Office, the Notre Dame Cathedral, the Jade Emperor Pagoda, Chinatown and Binh Tay Market – the central market for the city and one of the liveliest areas. Next we visit the Cu Chi Tunnels, the incredible network of tunnels that once stretched for 210 miles. This underground complex was built by guerilla fighters beginning in 1940 and construction continued throughout the Vietnam War. We return to our hotel where the evening is free. 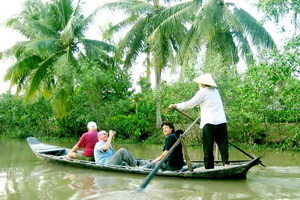 Today takes you to My Tho, the capital of Tien Giang Province. Situated on the Mekong River, 75 kilometers southeast of Sai Gon, the city is surrounded by orchards and rice fields, which produce grain for the entire country. Visit one or two of the islands that produce traditional handcrafts, coconut candy and bee farms. Visit the Vinh Trang Pagoda, the oldest one in the delta on your boat trip on the Mekong River. Return to Sai Gon. Check in hotel & stay overnight in Sai Gon. 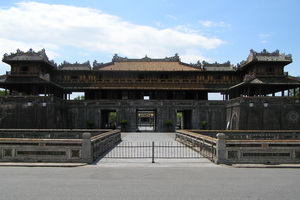 Today you leave Sai Gon fly to Hue in the morning, Vietnam’s political capital from 1802 to 1945 under the 13 emperors of the Nguyen Dynasty. Traditionally, the city has been one of Vietnam’s cultural, religious and educational centers. Visit the Imperial City, which is located in the Citadel. Modeled after the Forbidden City in Beijing, the Imperial City was built in the early 19th century. Explore the Thai Hoa Palace, with its spacious hall and ornate roof of huge timbers supported by 80 carved and lacquered columns. See the Halls of the Mandarins, the Nine Dynastic Urns and the site where the Forbidden Purple City once stood. Overnight in Hue City. 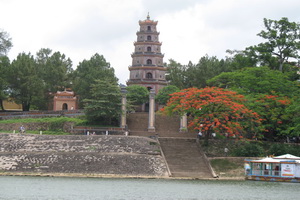 Just outside Hue, visit the Thien Mu Pagoda on the bank of the Perfume River, which was a hotbed of anti-government protest during the early 1960s. Next, visit the complex of the Tomb of Emperor Minh Mang, built in 1840, which is known for its magnificent architecture and elaborate decorations and is considered one of Hue’s most beautiful pagodas. After lunch at a local restaurant, visit Tu Duc Tomb, which was built for meditation, reading and theater performances in a tranquil setting of forested hills and lakes. Your final stop is at Khai Dinh, the last monument of the Nguyen dynasty. It has a remarkably long staircase flanked by dragons, ceiling murals and ceramic frescoes. Return to your hotel on the riverbank where your Art Deco inspired rooms are reminiscent of the 1920s and 1950s. Overnight in Hue City. 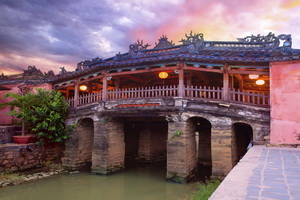 Today, journey south past the Hai Van Pass and Land Co, over a spur of the Truong Son Mountain Range that juts into the South China Sea, with spectacular views along the way. Upon arrival in Danang, visit the Cham Museum, which features a fine collection of openair sandstone carvings. Stop at China Beach, made famous in the American TV series of the same name. It stretches for many miles north and south of the Marble Mountains. The Marble Mountains surrounding the area are five stone hillocks – once islands made of marble – and each is said to represent one of the five elements of the universe. There are many natural caves in which Buddhist sanctuaries have been built over the centuries. Arrive Hoi An Town, check in hotel & overnight in Hoi An. 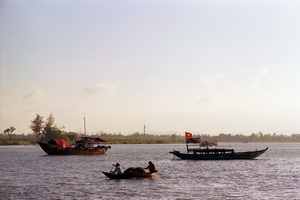 Enjoy a full-day excursion to Hoi An, a major trading center, once known as “Faifo” to the earliest Western traders. It was also an important port for the Dutch, Portuguese, Italian, Chinese, Japanese and other merchant vessels from the Far East. Visit a temple with partially gilded statues in the center, a pagoda dedicated to sailors and fishermen and a chapel with origins in the 1700s that reflects the influences of Chinese and Japanese styles. Stop at the Sa Huynh Museum, located near the Japanese Covered Bridge, which contains exhibitions from the earliest period of Hoi An’s history. Late this afternoon, take a boat trip on the Thu Bon River to Kim Bing Village on Cam Kim Island to see the wood workers and shipbuilding families. Return to your haven on world-famous “China Beach,” with the evening at your leisure. Overnight in Hoi An. 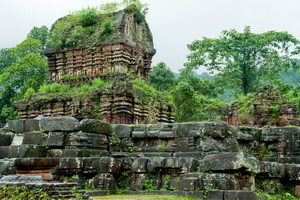 Leave hotel at 8:00am. Drive to My Son, a World Heritage, 50 km southwest of Hoi An. Located in a lush valley, My Son was a capital and religious center of Cham people, now remaining with red brick towers and sanctuaries. My Son, considered to be in the same league as some of Southeast Asia’s greatest archaeological sites, including Angkor in Cambodia, Bagan in Myanmar, Ayutthaya in Thailand and Borobudur in Indonesia. These towers and sanctuaries was built from the 7 to 13 centuries. Return to Town for lunch. In afternoon, free go shopping in Hoi An Town. Overnight in Hoi An. 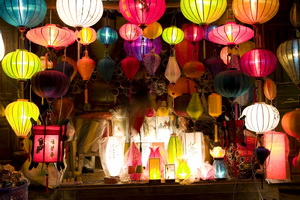 Enjoy the time in Hoi An – heaven of shopping place in Vietnam until noon time. You leave Hoi An transfer to Danang Airport in the afternoon fly to Hanoi. Arrive Hanoi airport, pick up & transfer to hotel for check in. Free for leisure. Overnight in Hanoi. 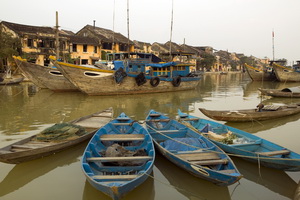 Having breakfast at hotel then start sightseeing Hanoi, a city of lakes, shaded boulevards and public parks, is the capital of Vietnam. It is a very attractive city with French-style architecture. You have a full day of sightseeing ahead, including a visit to One Pillar Pagoda, which was built by Ly Thai Tong and the Temple of Literature, founded by Emperor Ly Thanh Tong. Stop in the heart of Hanoi at Hoan Kiem Lake, which contains an islet with a tiny Tortoise Pagoda. After lunch at a local restaurant, visit Ho Chi Minh Mausoleum, the Opera House and St. Joseph Cathedral. Conclude with a visit to Bao Tang Lich, once the museum of l’Ecole Francaise d’Extreme Orient, which includes artifacts from Vietnam’s turbulent history. Water Puppet Show, Cyclo visiting Old Quarter. Overnight in Hanoi. 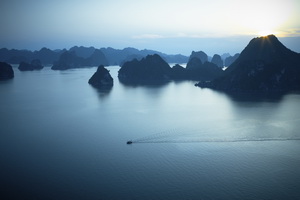 Day 11: Excursion to Halong Bay and Stay overnight on Board. (B, L, D)

Early this morning, we’ll drive from Hanoi to one of the most magnificent scenic environments in the world, Halong Bay. Covering 577 square miles, this vast bay is filled with more than 3,000 limestone “peaks” or karsts that jut from the deep blue water as far as the eye can see. We’ll spend a day and a half, including an overnight with dinner and breakfast onboard, exploring this overwhelming seascape from the decks of a traditional Vietnamese boat. Comfortable and intimate, your boat features hand-crafted wooden interiors including a dining room and pleasant air-conditioned cabins with private baths. Since we’re overnight on the water, we’ll be able to explore Ha Long Bay’s most beautiful spots with time to swim and even visit some of the largest rock formations and caves. This promises to be one of your most memorable travel experiences in Asia. Stay overnight on Boat. 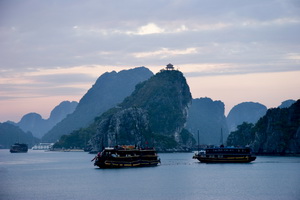 Rising to the sound of lapping bay waters, we have time for an early morning dip followed by breakfast. Sitting on the upper deck, you can relax while taking in the breath-taking beauty of the rocky islands rising from the emerald water of the bay.
After breakfast, explore Sung Sot cave, swim and relax. Cruises back to the jetty while brunch is served while you are cruising through the bay, along the way seeing more of the fascinating formations. Cruise check-out. Rejoin car drive back to Hanoi for overnight. Arrive Hanoi at 3:00pm. Check in hotel & free time to go sightseeing in the Old Quarter. Overnight in Hanoi. 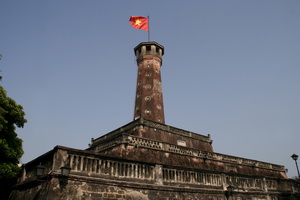 You have the morning free to relax before your return flight home. Finish unforgettable Vietnam trip with Vietnam Tour Advisor or you can extend some day to Siem Reap (Cambodia) or Sapa. Good bye & see you in the next time!

The Flash Player and a browser with Javascript support are needed..